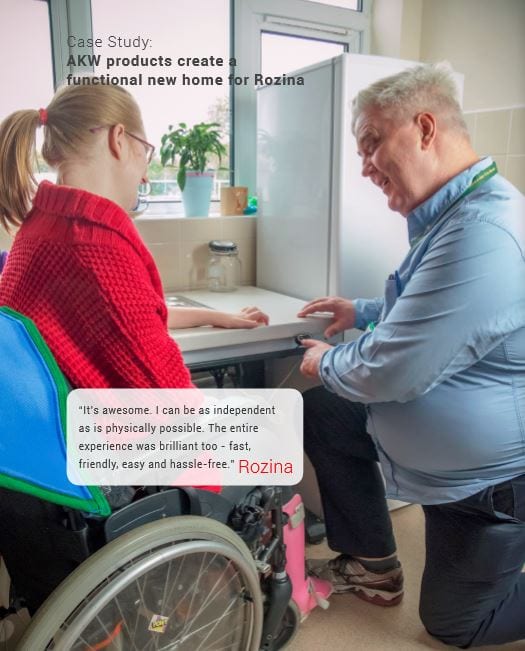 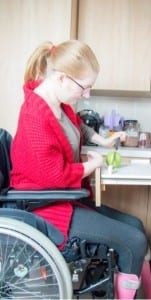 After being in the Dean Neurological Unit for two and a half years, Rozina’s care team were having difficulty finding her a suitable home in the community. Rozina was keen to move into accommodation that would allow her to live independently and autonomously. Although various houses and flats had previously became available, issues regarding wheelchair access made them unsuitable. Due to the amount of specialist equipment Rozina had, it was also important that she had accommodation that was large enough to meet her needs.
According to Kenny, the Occupational Therapist who worked on Rozina’s flat, this is an issue he regularly comes across. “We see this a lot. And, when people are living in accommodation that isn’t big enough for their needs, it’s like they’re living in a storage room rather than a home.” Kenny is an independent occupational therapist who is employed by Gloucester City Homes to provide assessments and recommendation for adaptations and equipment, to enable people to live safely in their own homes.

AKW hydraulic shelves, pull out cupboards, an AKW SmartCare Plus shower and tuff form trays were installed into her 2-bedroom flat. These solutions, along with the added space and privacy offered by the flat, have improved her quality of life and allowed her to live the way she wants to.

Before Kenny and his team started work on it, Rozina’s flat was in a poor state, but she was able to see the potential. When the flat came on the market, Rozina immediately saw the potential in it. It had off-street parking, level access, wide doors and doorways. More importantly, with a sitting room, kitchen, two back bedrooms and a bathroom, it had the right amount of space. Rozina could store her large stand aid, swings, wheelchair and other pieces of equipment in one room, and still have enough space to entertain her friends and family when they came over. As Rozina is also studying at the moment, the large flat would allow her to set up a corner desk to work from so she could continue her studies and pursue her career.

As the flat needed work done to it anyway, Kenny and his team decided to adapt it completely for Rozina’s specialist needs. After researching some local suppliers of accessible equipment, Kenny invited an AKW installer to visit the flat and identify what could be done. The installer explained about the range of advanced showers and kitchen items AKW offer, and the decision was made to work with them for the duration of the adaptation.

We chose AKW due to their adaptability, level of service, and wide range of products. Their support is phenomenal – their showers offer a 3-year warranty if anything did go wrong. We can tell the technician what happened and they’ll know what to bring with them. If they can’t source it, they will have the part ready extremely quickly, which is different to my previous experience of technicians taking 4 or 5 days to fix an issue.

Within the flat itself, there were a number of areas that needed attention. In the kitchen the biggest issue was shelving – in particular the corner units. As they were, Rozina would not have been able to reach the third shelf. The solution was hydraulic shelves that would bring them down to the countertop level.
Although Rozina can stand for very short periods, she has trouble reaching into high or further away areas. It’s easier for her to have access to items that are lower down, so having this flexibility within the cupboard spaces was extremely important. It also means her care team can access items without having to strain themselves reaching down. The corner cradles slide out and provide access to the entire contents of the triple shelf unit, so a lot more items can be held in there. This means Rozina can get more use out of the space instead of having to keep her kitchen utensils crammed in smaller cupboards. As a keen baker, this was something she was particularly pleased with. AKW also installed a drop down sink into the kitchen. The installer was able to reverse the sink so that the draining board is on the right rather the left, which meant the taps were closer to Rozina’s kettle, microwave and cooker. This created a small, functional area with the most commonly used kitchen items where she could prepare and cook food for herself and her friends without having to move around the rest of the room.

These additions have made the space a working, functional area for Rozina to cook and bake in – the first she’s ever had.

“I can adjust the sink to the height of whichever wheelchair I am using on a particular day and also allow for the height to be raised for the carers within seconds. The whole thing is amazing – it means I can continue to cook and bake with minimal support from others.”

In the bathroom, AKW installed an AKW SmartCare Plus shower that allows Rozina to adjust the temperature of the water herself, where previously she was reliant on carers to do that. The bathroom also includes wall boards behind the shower unit, an easy-to-install, long-lasting alternative to tiles.

Rozina has now lived in her new home for several months and is enjoying settling in and getting into a routine. The renovated flat has solved the problems she was previously facing, and the positive impact it’s had on her life has been significant.

The flat has been transformed into a homely, functional space that enables Rozina to pursue her education, entertain her friends and family, and live the way she wants to. Being able to play an active role in the renovation of her flat meant that Rozina could make decisions based on her own preferences, and the result is a personalised space that perfectly meets her individual needs.

For Kenny, simply being able to help Rozina bought the biggest joy.

“I’m just pleased to be part of the team that has put all this together for her and made it happen.“