Situated in Bromsgrove, Worcestershire, Chadsgrove School is a school for children with complex physical and medical needs. It first opened in 1976 with just 20 students, and over the past 40 years has developed to become a respected facility that has maintained an Ofsted ‘Outstanding’ rating since 2012. The school currently has over 130 students enrolled, aged from 2 to 19, and focuses on developing each pupil’s independence and celebrating their successes with a balance of academic, artistic and physical education.

The staff at Chadsgrove work tirelessly to ensure the school facilities are continuously improved on, and there are a number of innovative projects in the pipeline to enhance the students’ future experience. 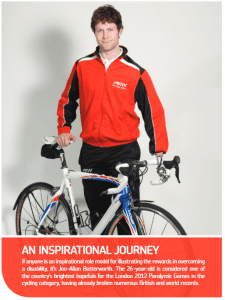 Chadsgrove School first worked alongside AKW during the 2012 Paralympic Games, when triple Bronze medalist Paralympian cyclist Jon-Allan Butterworth worked with us on number of initiatives in the local area to help highlight independent living for those with specialist needs. Campaigns have included a ‘design a mascot’ competition with children at Chadsgrove as well as officially opening a new cycling track to encourage an active and healthy lifestyle.

Having joined the RAF in 2002, Jon-Allan Butterworth served as a weapons technician in Afghanistan and Iraq. A rocket attack on Basra Air Station in Iraq in 2007 meant he was forced to undergo an above-elbow amputation on his left arm. He has been cycling professionally since 2009.

who went on to win 3 Bronze medals. During the past 5 years AKW have gone on to support Chadsgrove in a number of different ways across multiple projects, and developed a close relationship with the school.  The Chadsgrove’s school choir, the Chadsgrove Buskers, have also visited our system company DLP on the Isle of Man during their annual holiday to the island. 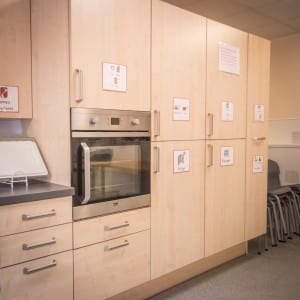 Chadsgrove’s new food technology kitchen is the project that has had the biggest impact on the young people studying at the school. Due to the age of the school buildings, the team had been gradually upgrading classrooms and communal areas over the last few years with the aim of fully modernising it all.  Learning how to take care of themselves and cook healthy, nutritious meals is a key part of building independence so one of the main purposes of Chadsgrove’s new ‘life skills’ kitchen was to create a space that would give children the opportunity to learn cooking skills in a safe and easily accessible environment.

Installed by AKW in 2015, the new kitchen was fitted with easily accessible cupboards, drawers, and worktops, as well as ovens and hobs. It’s a modern, functional space that the students enjoy spending time in and learning new recipes. It’s not just fairy cakes that are being cooked either – the amenities in the kitchen have enabled Chadsgrove students to cook a number of ambitious meals and snacks. In fact, on the day the kitchen was formally opened, the students chose to christen the new space by whipping up some homemade pumpkin soup. 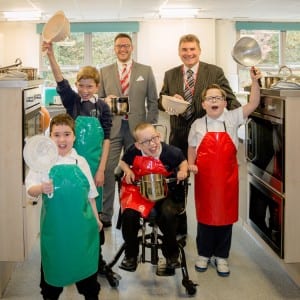 The reaction from the parents of students has also been amazing. They are thrilled that their children are learning skills that they can use at home, and it’s put to rest any worries they may have had about their child’s future and ability to live independently. More than just a kitchen, the food technology space is giving these students skills that they can develop on their own, and grow into active citizens in their community.

Liz Morgan, Chadsgrove School’s deputy head said, ‘The room has totally transformed the teaching of food technology at Chadsgrove School. We can now actively develop the children`s independent cooking skills through the use of the modified access to the ovens, sinks and hobs. The room also has brand new accessible equipment. The facility is allowing pupils to gain essential life skills. It is a fantastic design.’ 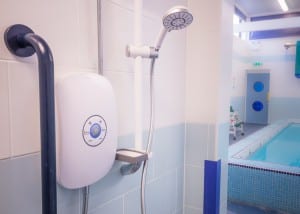 In order to promote its status as a specialist sports college, Chadsgrove has undertaken a number of projects over the last few years. One of these was the development of a new swimming pool, a project which required new bathroom facilities to meet the varying needs of the students in the school. As part of the bathroom renovations, AKW donated two of its award-winning AKW SmartCare Plus electric showers to help facilitate independence for those with special requirements.

The shower is RNIB accredited and includes large, clearly labelled tactile buttons to ensure easy operations. It also includes additional features to provide partially-sighted users with complete control over the shower settings. Thanks to AKW’s donation, Chadsgrove students are able to shower independently and safely, without always needing any staff to help them.

According to Liz Morgan, Chadsgrove School’s deputy head, the decision to work with AKW for these projects was an easy one.

‘It’s not your typical supplier/client relationship. AKW are always incredibly helpful and supportive, and the team is always keen to help us in any way they can. Whether it’s calling them up for a chat, or getting together to ask for some business advice, the AKW team are always happy to listen to me. I feel we’ve built a very strong relationship over the years.’

As well as the close relationship between Chadsgrove and AKW, Liz would also recommend AKW based on their professional approach.

‘When we were going through the planning stages for the food technology kitchen, the process was incredibly efficient from start to finish. The designs were spot on, the prices were competitive, and again with such friendly and warm staff, I felt able to ring them any time for advice.’

When it comes to future plans for Chadsgrove, Liz believes AKW will continue to play an important part in the school’s ongoing development. Chadsgrove have recently opened a new learning centre for youngsters between 19-25, with an initial intake of 6 students that is expected to increase to 11 in 2017. Liz hopes to develop a specialist college in the next few years that will develop children’s skills in English and maths, as well as enhance enterprise skills. There are already plans in place for a big campaigning push after Christmas, and the school have a number of large local businesses on board. It’s a lot of work, with lots of fundraising and campaigns to run, but it’s an exciting time for this one-of-a-kind school.

‘Our ultimate goal is to promote independence as much as possible, so that we can give purpose to every youngster’s individual life, regardless of what their disability is. We’ve built a great relationship with AKW over the last few years, and I hope it continues to go from strength to strength in the future.’