The AKW SmartCare Plus shower is the first of its kind… a Bluetooth controlled electric shower. The AKW SmartCare Plus has many care benefits, one of which being the multiple modes of control, which can be taken advantage of by using the wireless remote (up to 10 meters in range) but now the comes the AKW iShower App, which is now available in the app store and can be downloaded onto iPhones and iPads for free. 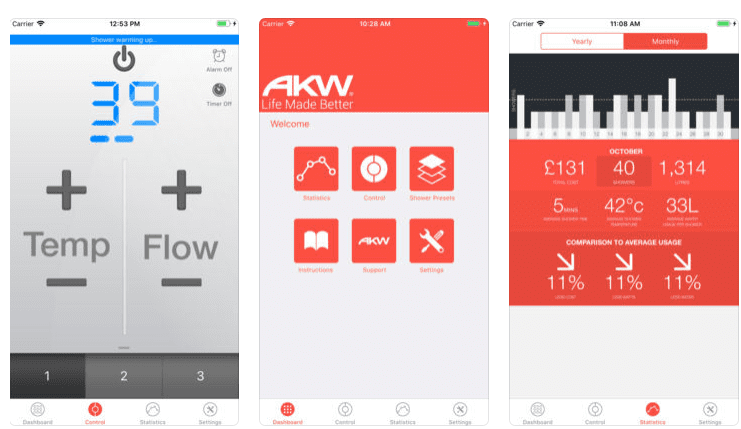 There is a wide verity of new features that are available with the AKW SmartCare Plus app. One of these features is the ability to create specific shower user settings using individual accounts so that people can have a pre-set shower setting which they can activate at the touch of the button on the app. This feature also offers carers the ability to set what they think is the best temperature and water flow for the specific users. Another major benefit of the app is that you can now monitor the shower usage, offering piece of mind for carers or family members who can check how often their relative is using the shower. The app also gives you the ability to set shower alarms for when it is time to shower; this is a perfect feature for those who like a shower first thing, the user can be woken by their alarm while the app automatically turns the shower on and sets it to their preferred temperature and flow. You can also set reminders to ‘Take a Shower’ and set a timer to remind the user or carer that they’ve showered for long enough.

So why not download the app? Above are just a few of the available features, some others include energy, water and flow monitoring, the ability to start the shower remotely and have it notify you via the app when it is up to temperature and full control of the shower up to 10 meters away…