As consumers, we all like nothing better than feeling good about a purchase we have just made. Very often this feeling isn’t just about what we’ve bought, it can equally be about the experience we had whilst buying it. It can also be the small things which can have a big impact in achieving this ‘feel-good’ factor.

Our AKW SmartCare Plus electric shower is loved by many, its flawless design and dynamic functionality provides an efficient and effective showering solution to all users. There are many features that the AKW SmartCare Plus implements that most people would overlook, little things that could make big differences to some people whereas others may not even notice.

Audible feedback is one of the many features that our AKW SmartCare Plus has, to some it is just a noise that is made when you press a button. To those that are visually impaired along with the raised buttons on the AKW SmartCare Plus allowing you to feel exactly what the buttons are. This could be the difference in allowing a visually impaired individual showing with independence as opposed to with assistance.

The sleek design isn’t just good to look at, it has a purpose also. The none reflective finish is there as after working with occupational therapist people with living with dementia can be affected by reflections of light, and even reflections of themselves. In the case that they do not recognise themselves and they see a reflection this could cause stress and make them extremely uncomfortable.
We know that the AKW SmartCare Plus will be fitted in multi-user situations so it needs to be safe for all, the smooth rounded edges are not just for aesthetics and to make it compliment your bathroom, they are also curved for safety in the case that an elderly person were to slip in the shower and hit their head on the shower it is a lot less likely to cause damage in comparison to a shower with harsh edges.

These are all very small things that when you initially look at the AKW SmartCare Plus would not come to mind, the little things sometimes make a bigger impact than the big things that’s why here at AKW the “Little Things Matter”. 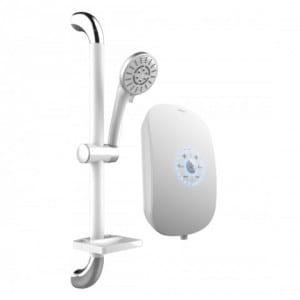