Here at AKW, it’s not all just about the products.  We get a huge amount of satisfaction in seeing the difference the products make for our end users; to help in their day to day quality of life and independence and it never fails to hit home to us just how much the end users appreciate the positive outcomes that these adaptations have.

Recently some of our team here at AKW worked with Gloucester City Homes and Occupational Therapist Kenny Thomson to transform the home of Rozina who needed accessible accommodation that would enable her to live independently and to pursue her education and her career.

Rozina had been in a Neurological Unit for two and a half years, the care team that looked after her were having difficulty finding a suitable home within the community.  Rozina was keen to live independently, although various houses and flats had become available, issues regarding wheelchair access had unfortunately made them unsuitable for her. 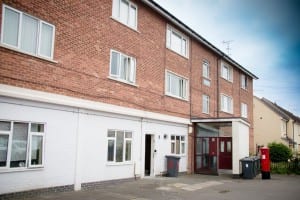 Rozina explained, “I needed a place where I could function, but still be a young person and have my friends over. The flat needed to meet my medical and physical needs but not look and feel like a clinical environment or be adapted to a point where it would be impractical for my friends, family and care team”

Together with Kenny (Gloucester City Homes Occupational Therapist) and his team, Rozina remained hopeful that a suitable flat would become available that would allow her to live independently. Thankfully, she didn’t have to wait long.

When the flat became available, Rozina instantly saw the potential it had – with off street parking, level access, wide doors and doorways. Most importantly, because it had a sitting room, kitchen, two bedrooms and a bathroom it had the right amount of space for her.  All this room would allow Rozina to have space to store her stand aid, swings, wheelchair and other equipment whilst still being able to entertain her friends and family. As Rozina is currently also studying, she even had  room for a desk allowing her to continue her studies and pursue her career.

Kenny and his team decided to completely adapt the flat for Rozina’s specialist needs. After researching some local suppliers of accessible equipment, Kenny asked us to send out an AKW surveyor to look at the solutions that could be provided and the decision was made to work with AKW for the adaptation.

“We chose AKW due to their adaptability, level of service, and the wide range of products. Their support is phenomenal – their showers offer 3-year warranty if anything did go wrong. We can tell the technician what happened and they’ll know what to bring with them. If they can’t source it, they will have the part ready extremely quickly, which is different to my previous experience of technicians taking 4 or 5 days to fix an issue”

Rozina was keen to be a part of the entire process, visiting several times during the build and was involved in choosing elements such as the work surfaces, flooring, doors and handles, in order to make the space her own. 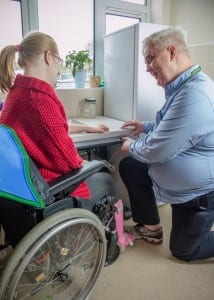 The flat contained a number of areas that really needed attention. Rozina needs a number of things that may not be needed in a conventional house, Rozina could not reach the top of the shelves, this was solved using AKW’s Activmotion Rise and Fall cupboards allowing Rozina to bring them down to countertop level.
An Activmotion Rise and Fall sink was also fitted allowing Rozina to adjust the height of the sink to whatever is comfortable for her.  Rozina commented, “I can adjust the sink to the height of whichever wheelchair I am using on a particular day and also allow for the height to be raised for the carers within seconds. The whole thing is amazing – it means I can continue to cook and bake with minimal support from others.”

In the bathroom, AKW installed an AKW SmartCare Plus electric shower, allowing Rozina to adjust the temperature of the water herself. The bathroom also contains AKW wall boards and Tuff Form former.   Kenny Thomson, Gloucester City Homes Occupational Therapist commented, ”AKW’s wall boards were easy to put in, easy to clean and keep their durability for longer and cause no problems with grout and mould.

Rozina has now been living in her new home for several months and is enjoying building a routine. The renovated flat has solved the problems that Rozina was facing before and the positive impact it’s had on her life has been significant.

Kenny added, “I’m just pleased to be part of the team that has put all of this together for her and made it happen”.