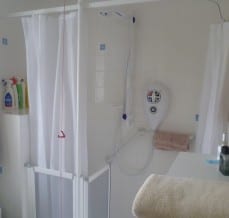 One of the guiding principles of housing provider Housing 21 is to enable residents to have increased independence and take control of the services they need.  With standard bathrooms, however, the residents at Kenneth Launder Court in Liskeard in Cornwall had lost their independence in one very important part of their lives – that of personal hygiene.  That is now a thing of the past and lives have been “transformed” with adapted bathrooms from AKW.

Prior to the adaptations, the bathrooms in each unit had the standard toilet, basin and bath – and it was the bath that was causing problems for residents. Many struggled with the bath and needed the help of care assistants to bathe.  This restricted bathing times to set times, days and frequencies.  Lesia Sugery says:  “Most of the baths weren’t being used because it was just too difficult, even with the help of carers.  Instead the care assistants were taking residents to the wet room communal showers and we only have one of those on each of the three floors.  The showers in the communal rooms were standard design with no aids.”

When refurbishment of the bathrooms was scheduled, Housing 21 turned to AKW.  Specialist surveyors from AKW consulted each resident on their individual needs and worked closely with the recommendations of occupational therapists to provide a solution for each unit.  Key to this was removal of the baths and replacement with low-level shower trays and electric showers.

Standard electric showers can have their limitations for people with restricted mobility or in need of assistance when showering.  The shower chosen for the Kenneth Launder refurbishment was AKW’s award-winning LUDA electric care shower. With an IP45 rated waterproof shower unit that carries a comprehensive BEAB Care approval, the LUDA can be located anywhere in the bathroom to meet accessibility requirements, either in a shower cubicle or over a bath, and at any height, in complete safety.  This offers a huge amount of flexibility in siting the shower unit and it can be done to suit an individual resident’s requirements.  With a non-return valve in the shower unit, there is no need for the shower head to be retained so the user, or carer, has full use of the extra-long shower hose.

A particular benefit of the LUDA is its integral grab rail.  Riser rails in standard electric showers are relatively flimsy, designed simply to keep the shower head in position, so additional grab rails are necessary.  In designing the LUDA, AKW decided that a neater, more aesthetically pleasing solution would be to combine the two functions in one and make the riser rail into a grab rail capable of supporting 90kg of weight.

Depending on individual residents’ individual tastes and needs, AKW also fitted a range of shower screens, including half-height screens for those units where a resident needed help with the shower, Sulby and Tuff Form shower trays, 4000 series shower seats and 1400 series grab rails.

The 4000 series seat range has been designed in consultation with occupational therapists, end users and installers.  The seats are strong, safe and comfortable with a 390 to 640mm height adjustment.  Reinforced cushion fixing lugs suit side transfers and there is a choice of styles.  The 1400 series grab rails are available in a range of configurations and feature a fluted surface for additional grip.  They are available in white or blue for users with visual impairments.

To say that the new bathrooms have transformed life all round at Kenneth Launder Court would be no exaggeration.  Lesia Surgery says:  “Before the adaptations, I was organising carers to visit certain residents three times a week to help with bathing and now no one needs help.  It’s great that our residents have total independence.  I’ve had excellent feedback from the occupational therapists and the fact that the adapted bathroom had been installed has even meant that one resident was able to return early to her own home from temporary residential care after a nasty fall.

“The bathrooms are also a lot less cluttered because with baths, residents had to have bath boards, steps and rails everywhere.  The bathrooms look so much nicer and I was able to send back over 25 pieces of equipment from each!”

Residents at Kenneth Launder Court are also happy to endorse the improvements achieved by AKW.  Mrs Thema Cummings, 63, has been a resident for four years and suffers nerve damage to one leg and balance problems case by severe labrythitus.  She says:  “With my old bathroom daily bathing or showering just wasn’t possible as I found getting in and out of the bath impossible – I had to stand to wash.  The new Luda shower and low shower tray have transformed my life and given me greater independence.  I never suffer because of the balance issue anymore because if I am having a bad day, I can just use the shower seat.  I also have peace of mind with the grab rails, which I didn’t have before.  A carer used to help me once a week, but now I can shower at my own pace, when I want to.”

Mr John Edwards is 80 and is one of the longest-established residents at Kenneth Launder Court.  He says:  “Before the adaptation I used the communal shower and never bothered with my bath.  Now I can use my own shower in my own home whenever I want.  The simplicity of the Luda shower is great and the way it remembers my temperature setting is really useful.”

Finally, Mr and Mrs Gas, 83 and 81, have been residents for 19 years.  Mr Gas has back problems after a fall five years ago and found getting in and out of the bath impossible.  He explains:  “Because of my back problems, I could hardly bend, so my wife had to help me in the bathroom.  Because she found the lifting very hard, we had a carer coming in once a week to help, which I didn’t really want – I want my own independence.  The Luda shower has transformed our daily lives.  My half-height shower screen stops the bathroom getting flooded while my wife helps me.  The shower twists round so my wife can operate it and it rises up and down for her to reach easily.  The spray settings help with my back pain and we both have our independence back.”

Describing the approach the company took to re-designing the bathrooms for Housing 21, Paul Tingey of AKW says:  “There was complete synergy between the way we approach our task and the way in which Housing 21 operates.  Everything revolves around independent living and quality of life.  We believe that just because someone has particular needs, they don’t have to compromise on choice, quality or style.  There is no such thing as a single fix and we worked with each resident to create a bathroom that met their personal requirements – both in terms of style and need.  To hear people talking about having their lives transformed by something as apparently simply as having a new bathroom is incredibly rewarding.”